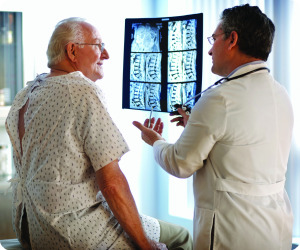 “We are honored to have the opportunity to partner with the Bentson Foundation to strengthen our neuroscience program,” said Duke Adamski, president, United Hospital Foundation. “This generous gift will allow us to raise the bar on neuroscience leadership and program development. We are grateful to the Bentson family for being advocates for changing the way we deliver care throughout Minnesota.”

The Bentson Foundation was started in 1956 by Larry and Nancy Bentson to support a variety of philanthropic causes throughout Minnesota. Previous gifts to the United Hospital Foundation from the Bentson family have funded the Nancy & Larry Bentson Cardiovascular Laboratories in United Hospital’s Nasseff Heart Center, and neurosurgery suites in the Nasseff Neuroscience Center.

“Neurological disorders affect millions of Americans and their families. We are pleased to support the Nasseff Neuroscience Center as it seeks to advance the diagnostic and treatment options for patients with neurological diseases,” said Laurie Kauth, Larry and Nancy Bentson’s daughter. “It is our sincere hope that many other individuals, foundations and corporations will join us in supporting this extraordinary and innovative center for research and care.”

Larry Bentson, who died in April 2009, had a 75-year career in broadcasting, entertainment and communications. He was instrumental in putting what is now KARE-TV on the air in 1953 and later founded what is now Midcontinent Media, a company that provides cable television, digital phone and broadband internet service in Minnesota and the Dakotas.

About the United Hospital Foundation

United Hospital, the largest hospital in the Twin Cities east metro area, is a not-for-profit hospital providing a full range of health care services to more than 200,000 people each year. United offers a wide range of health services including a birth center, cardiac care in the Nasseff Heart Center, emergency care, oncology, orthopedics, neurosciences and epilepsy, a pain center, rehabilitation, medical imaging and surgery. More information about United Hospital, which is part of Allina Hospitals & Clinics, can be found at unitedhospital.com.