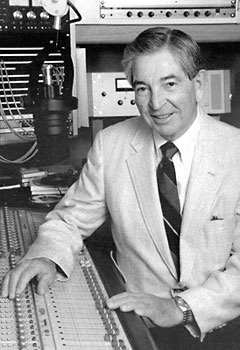 In a career spanning seven decades, Midcontinent Media founder and chairman Larry Bentson was a leader in virtually every aspect of broadcasting and communications.

Born in North Dakota in 1921, Bentson grew up in Saint Paul. He got his start in radio at the age of 12 as an actor on a children’s show called The Old Woman and the Shoe. When his uncle Ed Hoffman built WMIN Radio in Saint Paul, Bentson helped with construction after school and was a part-time engineer and announcer throughout his days at Central High and at the University of Minnesota. He joined the US Navy after graduating in 1943, serving as a Seabee officer in the Solomon Islands in the Pacific. He moved to California after the war, but returned to Minnesota and WMIN in 1949, and by 1950 had become its president.

In the meantime, Bentson’s father-in-law Eddie Ruben and Ruben’s partner Joe L. Floyd had become interested in expanding their movie theater business into radio and the new medium of television. They needed an experienced broadcaster to help them get started. Bentson became a partner in the new company, which became Midcontinent Media. Starting with WMIN and KELO Radio in Sioux Falls, South Dakota, Midcontinent went on to build, own, and operate radio and television stations and cable television systems throughout the Midwest.

Bentson and Midcontinent built South Dakota’s first television station, KELO TV Channel 11 in Sioux Falls, which became the cornerstone of the KELO-Land network of stations that attracted viewers throughout that state and in Minnesota, Iowa, and Nebraska. KELO TV began broadcasting on May 9, 1953.

On September 1, 1953, Bentson signed on one of the Twin Cities’ first television stations, WMIN TV, the forerunner of KARE TV. WMIN shared time on Channel 11 with WTCN TV. The station was an ABC affiliate but not much network programming was available, so WMIN TV created many innovative children’s shows, with stars including Roger Awsumb as Casey Jones, Jim Lange as Captain 11, and Steve Cannon as Wrangler Steve.

The company sold WMIN TV in 1955 but then acquired WLOL AM and FM, as well radio stations in Des Moines, Iowa, and Wichita, Kansas, and television stations in Madison, Wausau, and LaCrosse, Wisconsin. Twin Cities music station KDWB FM joined the fold in the mid-1980s. Bentson played an important role in the development of Twin Cities FM broadcasting when he coordinated the multi-station antenna complex on the IDS Center in Minneapolis. He also introduced cellular telephone service to the area.

Bentson and Midcontinent pioneered cable television in the Midwest, starting in South Dakota in 1966, when there were fewer than one million cable subscribers in the entire country. This grew into a fiber-optic network that became the backbone of one of the Midwest’s most important cable, internet, and telecommunications systems, and is Midcontinent’s focus today.

Among Bentson’s many honors is the Ward L. Quaal Pioneer Broadcaster Award, received in 2008. A past president of the Minnesota Broadcasters Association, he served as a director of the National Association of Broadcasters and the Pavek Museum of Broadcasting. Known for his philanthropy and community service, he served on the boards of the University of Minnesota Hospital and the Variety Club Children’s Hospital, and was a generous benefactor of the University of Minnesota and many other charitable and community organizations.