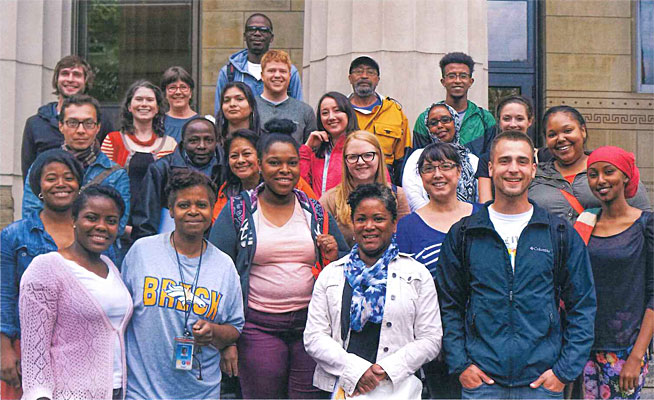 The new Minneapolis Residency Program is an elementary education program with a focus on diversifying the teacher candidate pool. It was created by the College of Education and Human Development in partnership with Minneapolis Public Schools (MPS), the Minneapolis Federation of Teachers, and the Education Support Professionals Local 59.

The programs’ inaugural cohort is made up of 25 individuals selected from an initial pool of more than 100 applicants. The group is 76 percent residents of color, compared with 14 percent of teachers currently in Minneapolis Public Schools overall.

“We want these residents to stay with our students and stay with our schools,” says Molly Sullivan, Grow Your Own coordinator for the district, who helped design and launch the residency program. “We knew that if we could create a program that breaks down some of the barriers, that would be a way to diversify the teaching workforce.”

The program was designed to make a teaching career accessible to a more diverse group. Accepted applicants enter a graduate program and work toward an elementary license. Each MRP “resident” earns payment from the district, is eligible for benefits during the residency, and pays a reduced fee for their program at the University.

“We know that there are a lot of people who want to be teachers, but they can’t because they can’t afford to quit working,” says Kathy Byrn, CEHD coordinator for the Minneapolis Residency Program. “A lot of those people are also people of color.”

Byrn, CEHD faculty and staff, and the Minneapolis Public Schools colleagues worked together to customize the delivery of the content of CEHD’s conventional teacher preparation program in a nonconventional way. It includes an intensive summer program followed by a year of co-teaching with outstanding classroom teachers, observation by CEHD instructors, intensive cohort instruction on Fridays, and a second summer of final coursework and assessments.

The retention rate for residency programs like MRP is much higher than for many other teacher education programs, says Byrn. National rates for residency-prepared teachers after five years are more than 85 percent. Higher retention rates area also associated with co-teaching, in particular, which prepares residents for their first year in the profession, a notoriously tough time for many new teachers.

“Ultimately, it’s the kiddos in the classroom who benefit,” Byrn adds, “because their future teachers are better prepared.”

The MRP is only the third “nonconventional” pathway to teaching developed by CEHD and approved by the Minnesota Board of Teaching. Another is a master’s in education to teach children with emotional and behavioral disorders (EBD), a multidistrict effort now in its second year, with leadership provided by professor Jennifer McComas (the EBD program was described in “Special delivery” in the fall 2015 issue of Connect). A third is the licensure program for second languages education, which adopted a much more extensive clinical structure than the conventional program.

Students in the CE+HD Pathways to Teaching program at the University of Minnesota learn that the Bentson Foundation will be paying for their tuition and for the cost of the program.

The cost barrier was also addressed by a major gift this summer from the Bentson Foundation to support students in the MRP and EBD residency programs. News of the grant had many students literally jumping for joy.

It’s too early to speculate about long term plans, buy MRP’s first year is encouraging. Possibilities include expansion to other licensure areas or running multiple cohorts.

“There is certainly an enormous level of interest now that the program is up and running,” says Sullivan.

Byrn hopes that MRP and programs like it will change the way people see the teaching profession and help combat a looming shortage in high-need areas.