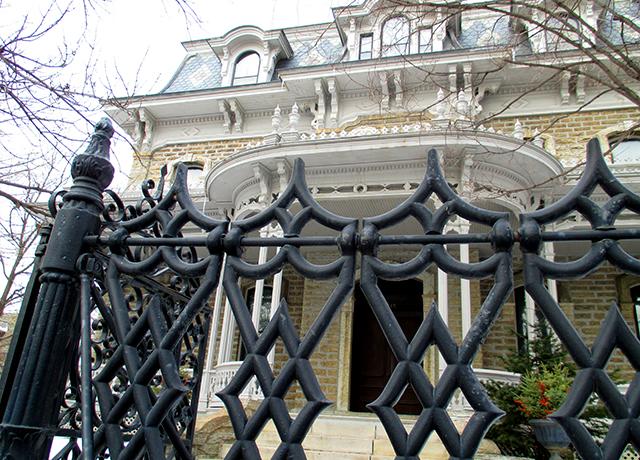 Earlier this week, a group gathered at the Alexander Ramsey House to hear about the Ramsey family’s secret struggle with mental illness — and to celebrate the successful completion of Mental Health Resources’ $1 million “Invisible No More” social capital campaign.

Alexander Ramsey, Minnesota’s first territorial governor, lived a life of luxury and privilege. But a family history of serious mental illness meant that he also lived another, less public life, one of secrecy and shame.

Earlier this week, on a bitterly cold night, a group gathered at the historic Alexander Ramsey House in St. Paul’s Irvine Park to hear about the Ramsey family’s secret struggle with mental illness — and to celebrate the successful completion of Mental Health Resources’ (MHR) $1 million “Invisible No More” social capital campaign.

Though conditions are far better than they were in Ramsey’s day, still many people with serious and persistent mental illness live marginalized lives, shut out of mainstream society, said Kathy Gregersen, MHR executive director. Because of this harsh reality, the campaign’s theme was chosen to send a specific and clear message.

“When we were developing this campaign,” Gregersen said, “we took a good, hard look at our clients. What we realized was that so much of the time they are not seen or heard. They are invisible in the community. This campaign was about changing that. It was our way of saying, ‘You are no longer invisible. We are here for you, and we always will be.’”

Founded more than 40 years ago in response to the closings of the state psychiatric hospitals, MHR provides a range of community-based services and supports for adults recovering from serious mental illness. The agency serves more than 6,000 clients and employs 210 staff members.

Mental Health Resources has never before run a large-scale fundraising campaign, said Jim Wyman, MHR board president, but a little over two years ago the board felt the time was right to turn to funders to expand the growing organization’s existing programs — and build new initiatives that would directly benefit their client base.

“The agency has been extremely effective and successful at treating clients for a long time,” Wyman said. “That continues to this day. We saw opportunity for this campaign because we realized we that throughout our history have been so focused on doing the work that was in front of us that we were losing sight of how much we could add value to helping our clients through fundraising.”

The “Invisible No More” campaign focused on four key initiatives, which include:

The campaign, which officially launched in 2014, was slated to reach its fundraising goal in three years. But that time was cut significantly, thanks to support from a wide variety of Twin Cities-area funders, Wyman said: “We accomplished our goal in two years. The board was impressed with how quickly we were able to make it happen.”

In order to meet the campaign goals, MHR development staff needed to let funders know more about their programs, the people they serve, and their hopes for the future. The organization, which has long been considered a leader in community-based treatment for adults with mental illness, has gone through significant change since Gregersen came on board in 2009. That fact alone wasn’t known to many in the mental health community.

“What’s compelling about MHR is we’ve been around for 40 years, but since 2009 the agency has tripled in size, in terms of budget and the number of clients served,” said Jill Johnson, director of advancement. “This led us to pursuing this fundraising campaign, to serve this influx of new clients in a better way.”

And development staff also worked to tell the stories of MHR clients, to let potential funders know about the challenges clients face in their day-to-day lives.

“By and large, funders weren’t aware that there was this much of a health disparity between people with mental illness and those without,” Gregerson said. “Part of what we did was educate them and say, ‘This is who this population is. This is how we can improve their quality of life.’ I think that what changed things for us was letting funders know about how serious this disparity actually is.”

One startling disparity between people with serious and persistent mental illness and the general population is life expectancy, Gregerson said: “Our population, or people who have chronic mental illness, die on average 25 years earlier than the general population. That is a huge health disparity. Part of what we wanted to aim for with this campaign was to directly address areas where we could have an impact on this disparity. Our initiatives all focus on that.”

Work still to be done

At the Ramsey House tour, visitors, all funders who had supported the “Invisible No More” campaign, walked through the stately old structure as costumed guides from the Minnesota Historical Society told about the family’s secret struggles. Ramsey’s own father died by suicide, a guide said, as did his brother, Justus. Ramsey himself frequently wrote of suffering from “the blues.” In 1875, his only surviving child, Marion, married Charles Furness, who later spent two decades of his life hospitalized for mental illness until he died in 1909. Marion’s daughters never married, and lived in the house until they died, donating it to the Minnesota Historical Society.

After the tour, visitors gathered in the parlor, and discussed what they’d learned. It was stark to see that, even with all their wealth and influence, the family seemed so restricted by their mental illness. They saw that, despite all the progress that has been made for people with mental illness, there is still work to be done.

Johnson looked around the assembled group and smiled, almost ruefully.

“It was a moment to sit back, celebrate our success and relax before launching into the next effort,” she said.