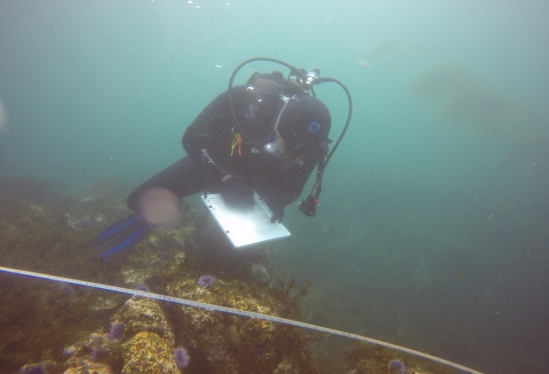 With new support for its Bentson Scholars Program, the Bentson Foundation secures future opportunities for outstanding students in marine science.

It was a partnership that made perfect sense.

Alumni Laurie Bentson Kauth and William Kauth both graduated from UC Santa Barbara and have stayed local ever since. When William shifted career gears from fisherman to marine biology teacher at Santa Barbara High School, he frequently visited the campus with his students. The couple raised a daughter so passionate about the ocean she became a maritime lawyer.

Their Bentson Foundation has long held a focus on public education and student support. So it came to be that in 2014 they launched the Bentson Scholars Programat UC Santa Barbara , a merit-based initiative for undergraduates with an interest in aquatic biology. They have now cemented the program for generations, with a new gift of $1 million to endow the fund based in the Department of Ecology, Evolution and Marine Biology (EEMB).

“We had always been back and forth with UCSB about this idea, so it was a natural thing to do, and it’s been more successful than we ever imagined,” said Bentson Kauth, whose parents, Larry and Nancy Bentson, started the Bentson Foundation in 1956. “UCSB and the team there have taken this program under their wing and made it even better than we ever dreamed it could be. The students are phenomenal. Every single one is beyond belief and each in a different way, but all related to marine science.

“That’s the whole idea — to get the brightest and the best and get them working on this topic,” she added. “The oceans and marine science are more important now than ever.”

The substantial Bentson Scholarship covers part of tuition and reduces the need to work, while also providing hands-on enrichment and research opportunities that enable scholars to immediately apply lessons from the classroom in the field.

It’s a win-win for the students and faculty alike, according to Craig Carlson, a professor and vice chair in EEMB, who oversees the program.

“The generous fellowships provided by the Bentson Foundation afford unique opportunities and experiences that take these outstanding students to the next level,” Carlson said. “These fellowships are often real difference-makers that allow these students to reach their academic and research goals.”

Those sentiments are echoed resoundingly by the students themselves, who attest to the scholarship’s impact on their academic pursuits and future aspirations.

“Without the Bentson Scholarship, I wouldn’t have as many of the opportunities that I now have in front of me,” said Ally Aplin, a pre-biology major in the class of 2021. “This scholarship allows me to be involved in incredible research opportunities to further my field of knowledge in a way that I never could in a classroom, and to help me to achieve my goal of being a part of the fight to save coral reefs.”

That’s exactly what the Bentson Foundation wants to hear from its scholars, according to Judi Dutcher, executive director.

“Looking toward the horizon, these scholars are going to have an impact in the field,” Dutcher said. “The decision to amplify our support with this new gift really is an outgrowth of the fact that we’ve been really pleased with the caliber of the students and the difference we’ve seen that they have made.

“Our support has been paid back ten-fold in terms of the leaders that they become and the testimonials they give in regards to what impact the scholarship has had,” Dutcher continued. “I would encourage any other donor or foundation, if you are considering something similar — whatever their field of interest — do it, because you will immediately see the impact of your gift. And that’s so important. Start modestly and you’ll see.”