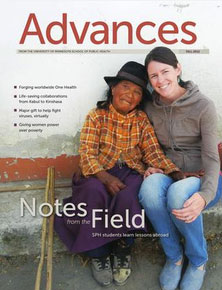 Attention-grabbing specters like bubonic plague, Ebola, or the slim possibility of anthrax attacks make for compelling headlines, and the University of Minnesota’s Center for Infectious Disease Research and Policy (CIDRAP) keeps tabs on all of these—along with other nightmarish, if distant, threats.

Recently, CIDRAP has made headlines for its work on a more familiar, yet potentially devastating, peril: influenza. In the past few months, the center has weighed in on the possible dangers of the H5N1 man-made flu virus and investigated the H3N2 swine flu virus. CIDRAP also released a major new report on the efficacy of seasonal flu vaccines and the urgent need to improve them.

Now, thanks to a $1.5 million gift from the Bentson Foundation, CIDRAP will be able to enhance efforts to prevent infectious diseases, whether emerging or familiar.

While CIDRAP monitors scores of important issues, from hantavirus to smallpox, its priorities are governed by the principle of proportional response, says Michael Osterholm, CIDRAP director and SPH professor.

Calling on sound science to educate the public, industry, and policymakers about looming health threats is central to CIDRAP’s mission. That education can take place on the airwaves of national news outlets (Osterholm is a frequently called-upon expert), through CIDRAP-hosted conferences, and in one-on-one discussions with government and business leaders. More than ever, that education is happening online.

The Bentson Foundation gift is targeted broadly to outreach, and “a major component of that is our web presence,” says Aaron Desmond, CIDRAP’s associate director for outreach and development. The gift will enable a revamp and integration of CIDRAP’s websites, whose users work around the globe (a third are from outside the U.S.) in clinical care, academia, the private sector, government agencies, and groups such as the World Health Organization. Each year, more than a million pages are accessed on CIDRAP’s sites.

“I’m proud of the work we’ve done to establish CIDRAP as a trusted source for public health reporting throughout the world,” says Osterholm. “Our staff works tirelessly to provide scientifically sound, up-to-the-moment content on critical issues.”

The gift also allows CIDRAP to further develop its use of social media and other online tools for outreach, says Bentson Foundation executive director Judi Dutcher, who notes the possibility of in-person outreach efforts, including summits on topics deemed critical by Osterholm and CIDRAP staff. “We wanted to give them as much flexibility as possible,” Dutcher says.

U graduates Larry and Nancy Bentson formed the Bentson Foundation in 1956 to advance a variety of philanthropic causes. With its history of support for the U, including a recent gift for a new School of Nursing teaching lab, and its longstanding recognition of Osterholm as an international “thought leader,” the foundation saw CIDRAP as a natural fit, Dutcher says.

“We’re becoming a very close global community… the fact that we have this center that is a leader in addressing emerging public health threats is a testament to the University,” she says. “We’re really excited to see what’s going to be accomplished.”