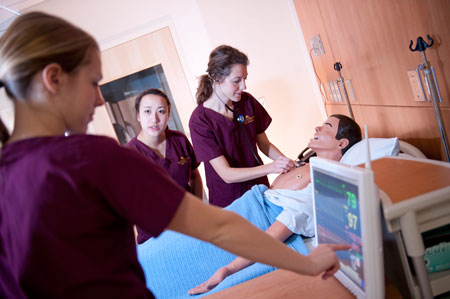 MINNEAPOLIS / ST. PAUL (03/07/2012) —The University of Minnesota has received a gift of $6.65 million from the Bentson Foundation for a high-tech teaching laboratory in the School of Nursing and to further strengthen the existing Bentson Scholarship Program.

The gift is a continuation of the philanthropic relationship between the university and the Bentson family, which began in the 1970s. In 2003, Larry and Nancy Bentson established the Bentson Scholarship Program with a gift of $10 million. In January of 2011 the Bentson Foundation gave the University of Minnesota $1 million for TCF Bank Stadium.

“I am deeply grateful to the Bentson family for their longstanding support in helping us achieve critical progress in areas important to our mission,” said university President Eric W. Kaler. “This kind of private philanthropy plays a pivotal role in building and maintaining excellence at the university, and ensuring access to excellence for talented students.”

The new gift, the largest in the history of the School of Nursing, provides $3.65 million to construct a new skills-learning environment, replacing the 25-year-old facility currently used by bachelor’s, master’s and doctoral students. Renovating this space is a major step toward achieving the school’s goals for reshaping nursing education to meet the dramatic changes in the interdisciplinary health care environment.

The renovation will create high-tech learning spaces that more closely match the settings in which health care is delivered, making it possible to teach advanced nursing skills in environments that span the continuum of care. It also will support team-based, interprofessional learning. The project will include acute, skilled, ambulatory and home-care settings, equipped with electronic health record technology, portable computers and wireless mobile technology used in telehealth.

“As our nation’s health care system continues to evolve, we must find new and resourceful ways to prepare nurse leaders to advance holistic efforts in improving health,” said Connie Delaney, dean of the University of Minnesota School of Nursing. “Nationally, nurses have gained recognition for the fundamental role they play in transforming our health care system. With the Bentson Foundation’s generous support, we will ensure that our graduates are prepared to meet their full potential.”

The new teaching laboratory will be called the Healthy Communities Innovation Center, a School of Nursing initiative in collaboration with the university’s other health sciences colleges to establish an inter-professional learning community for students and practicing professionals. With the Bentson Foundation gift, more than $6 million has been raised to date for the $7.8 million project and construction will begin in May.

“We believe this is a transformative project for the School of Nursing, and hope that our gift will inspire others to give as well,” said Laurie Bentson Kauth.

Another $3 million of the gift will provide additional funding for the current Bentson Scholarship Program. More than 500 undergraduate students representing a range of majors have received Bentson scholarships since the start of the program in 2003. The new gift will expand support for students in their junior and senior years to ensure that they successfully complete their degrees on time and get a good start on their careers or graduate education.

“Gifts from the Bentson family for student support have made an incredible difference in the lives of so many students, who in turn will go on to make an impact in their communities,” Kaler said. “The vision that Larry and Nancy Bentson had in creating the Bentson Scholarship Program has led to student success and is critical to the University of Minnesota living up to the promise of excellence and access.”

The University of Minnesota School of Nursing, ranked in the nation’s top 5 percent of nursing schools, is a leader in improving health care through research, education and service. The oldest continuing university-based school of nursing in the nation, it has a combined undergraduate and graduate enrollment of approximately 850 students. The school educates 55 percent of the faculty in Minnesota’s public and private nursing schools, advanced practice nurses and nurses who can assume leadership positions. The School of Nursing is part of the Academic Health Center, one of the most comprehensive facilities for health professionals in the nation, fostering interdisciplinary study, research and education. For additional information, please visit www.nursing.umn.edu.